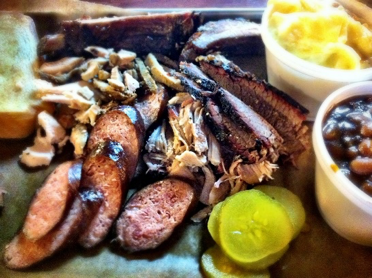 Hey guys! As a Rollins student, we all have to eat right?! And now that you’re in Atlanta, why not eat some of the best BBQ in the world, right here in this fine city. If you like BBQ as much as I do, check out below where I rank the top five BBQ restaurants in all of Atlanta!

Located just northwest of Atlanta in Smyrna, Thompson Brothers BBQ is a great experience for those looking to venture just slightly out of Atlanta for terrific BBQ. This local establishment has become known for its signature dish – “The Whole Nine.” A rather large sandwich consisting of BBQ ribs, chopped beef, bologna (yes, like bologna and cheese), and beef sausage, this sandwich will please any BBQ lover looking for all their favorite meats compiled onto one dish. Accompanied with a side of mac and cheese or baked beans, you are guaranteed not to go home hungry after coming face to face with this behemoth.

Bone Lick BBQ has differentiated itself from many other Atlanta BBQ joints in that it offers more of a BBQ-Mexican hybrid. From their delicious pork rind nachos, followed by their delicious black bean sliders or chicken tacos, this unique BBQ joint is suitable for anyone in the mood for both BBQ and Mexican. Their signature drink is “El Zorro” – a pineapple margarita with coconut ice and black pepper. The location I went to is actually their second location – their original location lies on the West Side of Atlanta and is backed by none other than Tobias Funke himself – yes, actor David Cross for all you Arrested Development lovers.

I have been to Grand Champion BBQ once, and I have been dying to go back. As soon as you enter the restaurant, their smoker is immediately to your right, giving you a sight and scent of what’s in store for your meal-to-come. I splurged and order the rack of ribs and boy am I glad I did. These ribs literally fell right off the bone and melted in my mouth. Garnished with some sweet and smoky in-house sauce, this dish was absolutely fantastic and amongst some of the best ribs I have ever had. Despite the fantastic ribs, Grand Champion has actually become known for its mac and cheese – some of the creamiest in all of Atlanta. The head chef even appeared on Good Day Atlanta to make the mac and cheese in front of an audience.

Daddy D’z prides itself on embodying one of the main staples of Atlanta culture – hip-hop. Situated just four blocks from downtown Atlanta on a rather dilapidated building, this BBQ joint offers a plate of killer ribs that they encourage you to top with some Polish sausage or their famous Que Wraps – BBQ pork wrapped in bits of dough and deep fried. All I ask is you don’t let the building’s rundown appearance fool you – it offers some of the best BBQ in all of Atlanta is certainly worthy of standing at number 2 on this list.

Ok, so let me start by saying it was an incredibly difficult decision deciding between Community and Daddy D’z. I like them equally as much, but I have to admit I did introduce a bit of bias into this decision – Community BBQ is located right up the street from my apartment, so I have been here more times than any other place on this list. Having said that, I really do believe Community BBQ is the best restaurant on this list. Not only do they provide spectacular BBQ, but the service is bar-none to anywhere else. You order your food right at the counter and they let you sit and bring it right to you, take the time to explain their variety of sauces, and ensure you that you are receiving the best BBQ experience. My personal favorite is their traditional pulled pork sandwich – the meat is smoky, crunchy and devoid of any fat whatsoever. If you’re looking for a great BBQ restaurant with great service and close proximity to both Rollins and (probably) your apartment, check out this local establishment.