Recently, Atlanta has finally been getting the credit that it deserves for having some of the best restaurants in the country. I’m from Atlanta, so I may be biased when I say Atlanta is the greatest food city in America, but…you can’t argue with the #1 restaurant in America being awarded to an Atlanta restaurant after all. If you aren’t eating at amazing places, then you’re doing it wrong. From seeking out places to eat in Virginia Highlands, Buford Highway, Midtown, Candler Park, Edgewood…the list could go on forever, we can’t forget that there are also some great desserts!

Sublime Donuts
Sublime Donuts opened its original location in 2008 near Georgia Tech and has been popular with students there ever since. Lucky for us over at Emory, Sublime Donuts opened a second location this year closer to us at the N. Druid Hills and Briarcliff Road intersection. An added plus is that they’re open 24 hours a day, so you can get your donut fill whenever you need. The “A town cream” (see the A shaped donut in the photo) is filled with cream as expected and appears on many “50 Must Eat Dishes of Atlanta” lists. There are so many great options, but some other favorites include an Oreo donut, S’mores donut, red velvet donut, Butterfinger donut, and toffee donut. They often have a rotating special, but the Reese’s Pieces special donut is my favorite. If you’re really feeling adventurous, you can even get a donut ice cream sandwich since they also sell ice cream in the shop. Their slogan couldn’t be more on point, “Eat one that’s worth it,” and boy, are these donuts worth it. 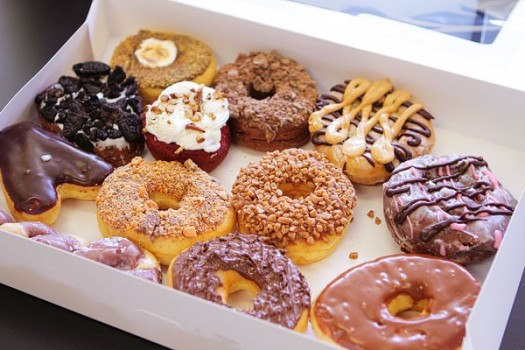 Paolo’s Gelato
Paolo’s Gelato is hands down the best gelato that you will ever find outside of Italy. Paolo’s is named for the owner, Paolo, who also has a great slogan for his shop, “Would you trust some guy named Bob making your gelato?” Paolo, originally from Treviso, Italy, took a worldwide tour of gelaterias before deciding to open this one in 2000 in the Virginia Highlands neighborhood. They make 62 flavors, but offer 10 at any given time. Often there are 5 fresh fruit choices (pineapple, grapefruit, peach, raspberry, apple, etc.) and then 5 cream based ones (straciatella, mint chocolate, chocolate, pistachio, coconut, coffee, etc.). Personally, I like to get the edible cup with 2 flavors. If you aren’t in the mood for ice cream, however, they also have cannolis and great coffee drinks as well.

King of Pops
Three brothers started King of Pops in 2010 after falling in love with ice pops in Central America. When they first started, I could only get my fix of pops at their one location: a cart on the corner of North Ave and North Highland. They still sell pops there if you want to experience the original location, but their business has really taken off since then. They have a permanent stand “walk up shop” in Inman Park. Additionally, they have a stand in Ponce City Market where you can even get sandwiches, your pop dipped in chocolate, or even a Popsicle Cocktail (yes, a cocktail with a popsicle in it). If getting a pop at either of these locations, you can also easily take a stroll on the Beltline. You can now also find their popsicles in grocery stores like Whole Foods or in coolers at restaurants like Willy’s (think an Atlanta version of Chipotle that is much better). At this point, you’ll even see them at concerts or at the Braves Stadium and Falcons Stadium. Lastly, they even have “pop-up” locations, so you can check their website to see where they will additionally be each day (or just look for the rainbow umbrella). Now, to the flavors–they often divide the board listing their flavors into “fruity pops” and “creamy pops.” Various flavors of the pops are seasonal since they always use high-quality, fresh ingredients in making the pops. Each visit, you will probably be presented with a slightly different selection of pops. For your first time, however, go for the Raspberry Lime if you want fruity or the Chocolate Sea Salt if you want creamy. They’re all great, so you can’t go wrong, but some other great flavors include Fresh Peach, Strawberry Lemonade, Thai Iced Tea, Key Lime Pie, and Cookies ‘n Cream!

So come to Atlanta, and explore some great treats!