While I have only lived in Atlanta a little over 6 months, I have been able to spend my past two birthdays in this city. The experiences I had celebrating my birthday are some of my favorite memories of my time here in Atlanta.

When I was a prospective student, I had a chance to visit Rollins not only at Visit Emory but also at an event in the fall (Destination Public Health). It just so happened to land on my birthday weekend, so my mother and I decided to celebrate by visiting Atlanta for the first time. As you can imagine, we were quite the tourists the first time we came. The Georgia Aquarium and the World of Coca Cola were our first stops. I took selfies with penguins and tried close to every type of soda concoction that you would imagine. But my favorite memory was our dinner that night, where we went to Agatha’s. 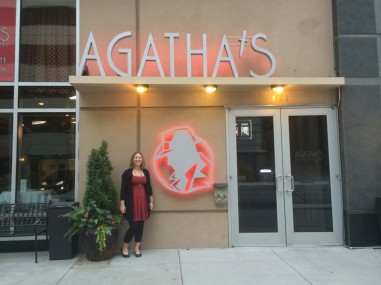 This wasn’t your average dinner. It was a murder mystery theater dinner where every guest got to be a character in the show! My mom was decked out in 60’s secretary glasses and I ended up being the murderer! I had quite the monologue to give at the end of the dinner. The actors were amazing, the food and drinks were great, and I don’t think I have ever laughed that hard during a dinner out. We also had a great time speaking with the other people at our table who told us all about the city. The great thing about Agatha’s is that they change the show every couple of months, so you can keep going back for a new mystery!

One year and a drastic hair cut later, I was now a happy graduate student at the school that I fell in love with the year before. This time I got to celebrate with the great group of friends I had found when I came to Rollins. All of them were up to doing something different for my birthday, and yet again I found something unique. We decided to go to Urban Escape Games.

This company makes escape rooms, where your group is locked into a room for a certain amount of time and has to find the key and the passcode within the room in order to win. Being public health students we obviously chose the CDC room, where the story was that we were touring the building and there was a disease outbreak. We had one hour to use to clues in the room to find the antidote for the disease and the code to leave the room. It was challenging, and you probably don’t realize how fun it is until after you finish, because having a timed challenge with a crowd of Type A graduate students can turn hectic pretty quick! But it was a really fun and unique way to spend a night with your friends. We ended up being just two minutes shy of escaping on time, but we were laughing so hard at all the ridiculous things we did that we didn’t care. We are definitely planning on trying to escape again sometime soon!

I have learned that the best part about Atlanta is that you will never be bored. There is always something unique to do. I know that I will find something equally interesting as Agatha’s or the Escape Rooms for my next birthday in Atlanta!